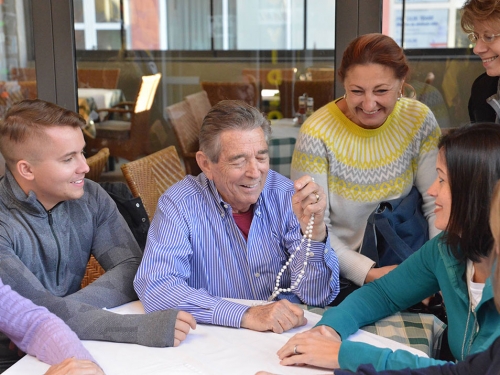 Wayne Weible, founder of Weible Columns was a former newspaper publisher and columnist. In October 1985, he became interested in the alleged apparitions of the Blessed Virgin Mary to six young Croatians in the tiny farming village of Medjugorje in what was Yugoslavia and is now Bosnia-Herzegovina. Wayne decided to write an article about them for his four weekly newspapers. It was while viewing a videotape of the apparitions as research for the article that Wayne, a Protestant at that time, states; “I suddenly felt a strong message from the Blessed Virgin Mary asking me to write about these events. She spoke interiorly to my heart saying, "You are my son, and I am asking you to do my Son's will. Write about these events and if you choose, the spreading of the messages will be come your life’s mission.”

Wayne has since authored twelve books on the apparitions of the Blessed Virgin Mary in the village of Medjugorje, all of which have become international best sellers. His first book, Medjugorje: The Message, has sold more than 500,000 copies in the U.S. and an estimated 500,000 in other languages around the world. It remains, to this day, the best selling book on the Medjugorje apparitions. Known fondly among the visionaries and guides in Medjugorje as the “book of conversions” and “the anointed book”, Wayne would be the first person to tell you that it was not he who wrote the book. The Holy Spirit inspired Wayne’s writings to draw thousands of people to Medjugorje, to Our Lady and thus to Jesus and His Church.

Miracle At Medjugorje, Wayne’s original collection of newspaper articles written on the apparition site, first published in Sept. 1986 has reached an astounding 130 million-plus printed copies and is still updated and distributed throughout the world.

Wayne spent most of his professional time writing and lecturing on the phenomenon of Medjugorje, travelling throughout the world to countries such as Russia, the Ukraine, the Philippines, Lebanon, China, Australia, Great Britain, all of South America and much of Central America. Wayne also spoke in thousands of churches and conferences here in every state of the United States. He has appeared on numerous national, regional and local television and radio programs including EWTN’s Mother Angelica Television Show and the Oprah Winfrey Show.

Wayne traveled to Medjugorje more than 129 times leading several pilgrimage groups each year. He is personally acquainted with all of the visionaries. In 1991, he converted to the Roman Catholic Church; however, he continues to emphasize, “The message coming from the Virgin Mary in Medjugorje is for all faiths, not just for Catholics - or for that matter just for Christians.”

Sadly, Wayne passed away on April 21, 2018 after a three-month illness. He is greatly missed by his family and by the thousands of people who owe their renewed faith to his saying ‘yes’ to Our Lady. His company, Weible Columns continues, now run by his widow Judith Weible. She continues to lead the “Weible Pilgrimage to Medjugorje’ every fall.